To me, a story is all about the characters.  And I especially enjoy when these characters interact with one other.  But at the same time, dialogue can fall flat when it does not resonate or make the reader feel something.

Dialogue is much more than just the words on the page. Dialogue is largely about how we, as writers, express our characters’ emotions and how the reader, in return, responds to these emotions.

In 1967 Albert Mehrabian, a professor at Stanford University, specifically looked at emotion and communication.  In his study, he concluded that 55% of emotion is communicated through a person’s nonverbal cues: facial expressions, gestures, posture and movement.

To emphasize how powerful nonverbal behavior can be in dialogue let’s look at a few lines where I took the nonverbal cue away.

Notice how bland and unemotional these lines are.  Now let’s add the nonverbal cue and see how it changes the lines.

Notice how in each one of these examples the nonverbal cue adds intensity or emotion to the line.  In the first example, the cocked eyebrow gives us a sense of skepticism and in the last sentence the slamming of the phone gives us anger. Think about how using a character’s facial expressions, gestures, movement and posture may compliment or add emotion to the dialogue.

Paraverbal (How we say what we say)

Mehrabian went on to state that 38% of emotion is communicated through a person’s paraverbals: how they say what they say.  Look at this example from Polly Horvath’s One Year in Coal Harbor and notice how she emphasizes certain words to increase the emotion of the dialogue.

“Oh really? Well where does he think I went to cooking school?”

“PICKED IT UP?” Miss Bowzer’s eyes were afire and her neck was getting blotches of red.  Maybe I’d gone too far.

“ON THE STREET? I’ll have him know I went to the Cordon Bleu in Paris for an entire semester!” (42)

Through the use of typography the reader can begin to feel Miss Bowzer’s frustration. Horvath is using the character’s paraverbals to stress the emotion.

Now look at this example from Tim Wynne-Jones’s Blink & Caution and notice how he uses hesitation in the dialogue to create emotion.

“After what happened… after what I did…” She finds her mouth is dry.  She remembers her soda, takes a swig.

“After that… what I was talking about… I felt like nothing was real. It was” – and this is new to her, the first time she’s thought of it- “it was as if I were the one who was dead.  I killed my brother.  But I killed myself, only I didn’t know it.  And all this – everything that has happened since then is just…” (223)

The character’s hesitation in this passage shows her struggle and reluctance at opening up to the truth.  By emphasizing how she says what she says, Wynne-Jones is heightening the emotion within the dialogue.

Often as a writer we think about our dialogue only through the lens of the words our character use.  However, more often than not it is the emotion behind these words that create a reader reaction.  We want our dialogue to make the reader feel something; to stir emotion.  Challenge yourself to use your character’s nonverbal and paraverbals to create dialogue that resonates with the reader.

*For a discussion on pacing, spacing, metaphors, objective correlatives and the actual words we use to create emotion in dialogue you’ll have to persuade Ingrid to invite me back. 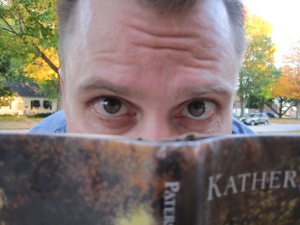 Jeff Schill holds an MFA in Writing for Children and Young Adults from Vermont College of Fine Arts and is a proud member of the Dystropian family.  He lives, works and writes in Milwaukee, is deathly afraid of dogs and is completely creeped out by the stains found in library books.

You can read more of Jeff’s work on his blog: http://jeffschill.blogspot.com/

7 thoughts on “Creating Emotion Within Dialogue”