A few months ago, a manuscript I wrote was “on sub.”

This means that my wonderful agent had sent the book out to editors who she felt might connect with it—leaving me free to chew my fingernails and refresh my email way too often.

It was another harrowing step in the terrifying dance with acceptance and rejection that we as artists spend our lives doing.

As a travel writer and freelance journalist, this wasn’t my first time waiting on news from an editor. I’ve had years of practice and have had to deal a nice, healthy amount of rejection. Along the way I’ve picked up four keys—four things to focus on when you’re on sub—that I truly believe help the process flow more smoothly:

After eight years of freelance writing, eight years of putting my work in front of people and saying “is this good?” I have come to believe that gratitude is the only metaphysical secret to career success. As Matthew McConaughey said in his Oscar acceptance speech: “It’s a scientific fact that gratitude reciprocates.” That’s not just our favorite shirtless actor’s homespun wisdom—it is a scientific fact, as Chris Mooney explains here:

Why is gratitude so powerful (particularly for creatives)? I think part of it is because gratitude is the diametric opposite of cynicism and cynicism is a cancer to the artistic spirit. Take it away Conan: 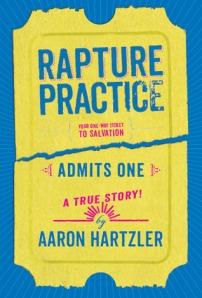 A few years ago, my friend Aaron Hartzler’s wonderful book, Rapture Practice, was out with editors. From the moment I met him, at my first SCBWI conference, Aaron has always been one of the most generous writers I’ve ever known. But with his work on submission his desire to be a champion for the writing of others went into overdrive. He called me at 6am to tell me that he was in New York describing my book to an editor—the same editor emailed me that very day. I saw him connect other friends to his agent or to TV people who might option their work. There was no financial upside for him, he had no ulterior motive—he’s just a nice guy who truly believes that “a rising tide lifts all boats.” When my novel was on submission, I did my best to pay forward Aaron’s lead and I discovered that a funny thing happens when you genuinely wish success on others: they wish it back on you. That’s not the reason to do it—do it because it’s fun to support people you like and material you believe in—but damn if that reciprocal flow of positivity isn’t a nice ancillary benefit.

When your book is floating through cyberspace toward the desk of an editor, it’s easy to think: “There are so many books, so many people who want to write, so many people who tweet ‘#amwriting’ when all I’m doing is #amsleeping—how will I ever get my shot?” The solution, as far as I can tell, is to curl up with a good book. Visiting the local bookseller to ruminate on just how many books readers have to pick from is terrifying. The remedy? Sit down, fall into a story, and remind yourself why you wanted to write in the first place. Remind yourself that everyone has different tastes and that’s a good thing. Remind yourself that you aren’t writing to prove anything or to win awards or to spite anyone who ever said you weren’t good enough. You are writing because you love stories and you have stories to tell.

In The War of Art Steven Pressfield relates an anecdote from the day John Grisham sold The Firm. According to the story, Grisham hung up the phone, rolled a new sheet of paper into the typewriter and began his next book. When I first read that in 2006, I thought, “that’s the dedication it takes to build a life in the arts.” But in the eight years since, I’ve changed my tune. What I think now is that Grisham said to himself: “Okay, Johnny boy, the day is yours! Do what you want! Get drunk at noon! Order the lobster!” Then, he thought for a moment and realized that what he really wanted to do on this celebratory, clear-the-calendar day was to start another book. Because for the writer writing is a job, but it’s also a diversion. It’s sport. It’s recess. And that—the belief that creativity is an end unto itself—is what I think a life in the arts truly requires. The world is an ocean and we artists are a bizarre species of fish that wear our nerves on the outside. We’re particularly sensitive to jellyfish stings and rejection. Creating is our way of staying afloat. It’s how we swim. And as Dory says so eloquently:

There you have it. I can’t guarantee you that this little playbook will work for you when you’re on sub. I hope it does. All I know is that when I send out work these four points are the only things that have ever helped me. That doesn’t mean that I won’t act like an absolute maniac the next time my work goes out to editors.

But hopefully, once my fingernails have been bitten to the quick (but before I resort to trying to chew my toenails), I’ll manage to be grateful, to be a champion, to read and to write. Maybe the past patterns will hold true and those techniques will work again. Maybe they won’t. But either way, it’ll be a better use of my energy than refreshing my email for the ten millionth time.

Steve Bramucci is grateful to his awesome VCFA classmate Ingrid for letting him write this. His first book, Ronald Zupan and the Pirates of Borneo!, is being published by Bloomsbury (2016) with a sequel the following year. He can be found on Twitter at @stevebram.