In the part one of this article I talked about the teenage brain and the common teen traits of spotty memory, poor impulse control, the desire to do new things, and spending less time with family and more time with friends. Today we’ll talk about the last four traits that will help you craft authentic young adult characters.

The one thing that is working completely in the teen brain is the limbic system, which deals with emotion, and is the part of the brain responsible for “pleasure seeking”. This seems to explain a lot about all of the heightened emotions that we deal with in our teen years. I remember feeling as though the entire world was ending when I had a fight with friends, or didn’t get asked out by the boy I liked.

Journalist David Dobbs points out that “Teens take more risks not because they don’t understand the dangers, but because they weigh risk versus reward differently. In situations where risk can get them something they want, they value the reward more heavily than adults do” (Dobbs 54).

Not all teenagers try drugs and alcohol. However, because many teenagers will have to handle situations involving drugs, alcohol and sex it is a realistic part of many teen’s lives.  When crafting a character, a writer should ask:

Not every teen character has to try these things, but the question should be asked of them.  Not only is the chemistry in their brains screaming for them to try new and possibly dangerous things, their environments are too. For many teenagers these questions will come up, and that is where the writer has to come in and answer the why’s and how’s, otherwise the writer is not being true to her teenage character, nor her teenage audience.

7. Teenager’s brains are wired to go to bed later and get up later.

It is scientifically documented that teenager’s melatonin levels do not start working until up to two hours later than everyone else.[1] Therefore asking a teen to go to bed early and rise early is messing with their brain chemistry. If you have teenagers in your stories consistently waking up early and loving the sound of birdsong, there had better be a really good reason to back it up.

Every human being is different; therefore every teenager is different and deserves to be treated as an individual. We should treat our teen characters as individuals as well. Though steeped in research, these traits are not hard and fast rules. I suggest them as guidelines, something to test your character against for authenticity.

Try examining your teen character through the lens of this knowledge. Ask yourself if you’ve been authentic not only to the character as an individual, but to your character as a teenager. Your teenager should exhibit at least a few of these traits, and if your character seems more adult than teen, ask why. Perhaps there is a good reason and you can back it up in the story. Perhaps your character has had to grow up incredibly fast due to circumstances at home, such as living with a single parent or in a foster home. Consider ways in which some teen traits can still seep through. Perhaps an otherwise very responsible teen decides impulsively to just once sneak out of the house to spend time with friends. There are many ways in which you can be certain to remain true to a teenage character. Maybe your teenager gets bored and decides to take a late night drive, or climb into a boy’s window at 3 a.m. For some teenagers this can be an every now and again thing, for other teenagers they are made of impulsivity. Choosing how much impulsivity to add to your character is part of what makes your character an individual. The same goes for emotional reactions or risk taking behaviors.

8. Rise in compassion and awareness of the feelings of others.

Remember no one person is exactly like another; therefore one cannot really distill the essence of what it means to be an adolescent into a bullet list.

I hope this gives a touch of insight into the teenage psyche and perhaps as a result you have a few more tools with which to imbue your characters with a more authenticity and believability.

Jessica Denhart has an MFA from the Vermont College of Fine Arts and is a proud Dystropian. She writes Young Adult fiction and middle-grade, which varies from contemporary, to magical realism and “near-future quasi-dystopian”. When she was little she sometimes wanted to be a nurse or a fireman, but always wanted to be a writer. She ran away once, packing a basket full of her favorite books. She throws pottery, loves to crochet, and enjoys cooking and baking. Jessica lives in Central Illinois.

Strauch, Barbara. The Primal Teen: What the New Discoveries about the Teenage Brain Tell Us about Our Kids. New York: Anchor, 2004. Print. 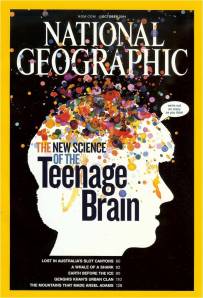 As writers of young adult literature, many of us are in an interesting position of no longer being a teenager. We don’t understand what it’s like to be a teenager in today’s world. We’re not cool anymore, we don’t get it…

How can we write about teenagers and get it right, especially now that most of us are no longer on the inside? We can rely on memories. Memories fade and change over time. So I chose to research the psychology of the teenage brain, because that’s where the way we think and feel starts, in our brains.

We were all teenagers at one time. If we try, we can remember what it felt like to have been there, in the thick of adolescence and all of its turmoil.

In my research I discovered that the teenaged brain is still changing, developing and hardwiring. There are so many changes going on in the adolescent brain that often, like an electrical connection that is breaking down, the brain cuts in and out on a teenager at critical times.

A teenager may have trouble with their memory when it comes to lists of things to do, or directions given to them by their parents or teachers. It can also relate to the ability to remember what to do for homework. What seems like lack of attention or inability to focus is something that can be specifically traced to the, as yet unfinished, wiring of the parietal lobes.

Teenagers may not be able to hold their emotions in check and scream at or hit someone in an overreaction to a minor incident. They may say whatever comes to their mind first, even if it’s cruel or blunt. They may do something risky due to a lack of impulse control.

3. The overwhelming desire to do new and exciting things.

Teenagers may do crazy things, like diving off of cliffs into water 75 feet below as one of my friends did (and still does). Some drive incredibly fast, which is something that I heard over and over again from friends. Some love the thrill of video games; others enjoy a good scare through ghost stories and scary movies. Some teenagers sneak out of the house to do forbidden activities, like tromping through a graveyard in the middle of the night. Some drink and experiment with smoking and drugs.

You may recall this part of your own teen years. I remember this time in my life. I didn’t really fight with my parents much. My rebellion against them wasn’t so overt. It was more subtle. It was a slow moving away from caring about their input in my life and spending more time with friends, caring more what they thought. This is very common in the teen years and is a direct result of brain chemistry. The neural hormone, oxytocin is prevalent in the teenage brain making social interactions more desirable.[1] Basically, teenagers want to hang out with their friends and avoid their uncool parents.

Jessica Denhart has an MFA from the Vermont College of Fine Arts and is a proud Dystropian. She writes Young Adult fiction and middle-grade, which varies from contemporary, to magical realism and “near-future quasi-dystopian”. When she was little she sometimes wanted to be a nurse or a fireman, but always wanted to be a writer. She ran away once, packing a basket full of her favorite books. She throws pottery, loves to crochet, and enjoys cooking and baking. Jessica lives in Central Illinois.

This article was brought to you as part of the March Dystropian Madness Series.