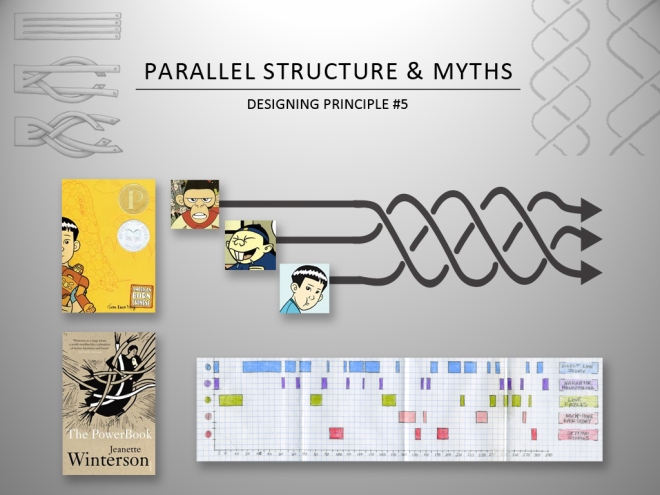 The fifth category in our exploration of designing principles is the use of parallel stories and myth.

In my first post, I discussed The Godfather and how it used a designing principle with an underlying fairy tale structure. In fact, the hero’s journey (aka: mythic structure) is the exact same strategy, where the major plot beats of the hero myth are used to structure the plot. You can use this concept with any fairy tale or myth. You don’t have to stick to the hero’s journey. This type of design is also intended to be invisible. You’re supposed to feel it, but it isn’t supposed to draw attention to itself.

The designing principle of parallel stories, however, is more transparent. Parallel stories uses myths, fables, and fairy tales, as a second story told in conjunction with the main story. Let’s look at some examples.

Gene Luen Yang uses this technique in his graphic novel, American Born Chinese, where he interweaves three parallel stories. The first is a Chinese folk tale, the second is a contemporary story with the use of stereotypes, and the third is a more realistic tale about trying to fit in with white culture. As the stories develop and run parallel to each other, the threads unveil the roots of certain stereotypes and the complexity that is cultural identity. By juxtaposing these three stories side-by-side the reader is able to make connections between the different threads that they wouldn’t have if each thread was told separately.

The Powerbook by Jeanette Winterson, not only uses a parallel structure, but what I call parallel substitution structure. The protagonist, Alix, is a storyteller who spins tales in cyberspace, which is where she meets her lover. But as the romance develops the lines between the real world and the fantasy-internet world begin to blur and entire sections of the novel are told through fables. At one point Alix and her lover are substituted with Guinevere and Lancelot, later they take on the adulterous roles of Francesca and Paolo, as well as multiple others. Each fable moves the plot forward by substituting itself for the primary story. Thus, Lancelot’s search for Guinevere becomes Alix’s search for her lover, and the murder of Francesca and Paolo reflects the danger of Alix’s affair with a married woman. A dozen different stories weave into one, exposing the theme that all love stories are the same.

How might you use parallel stories and myth in your book? Ask yourself:

Up Next: Designing Principle #6 – Storyteller

One thought on “Designing Principle #5: Parallel Stories and Myth”